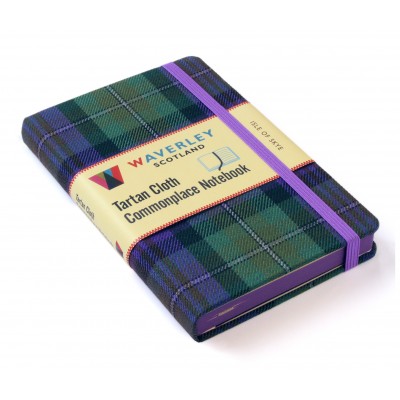 The Isle of Skye tartan blends rich, heathery purples with shades of misty and mossy greens.

The Isle of Skye, long celebrated for its beauty in poetry and song, is situated off the west coast of Scotland, connected to the mainland by a bridge. The island’s largest town is Portree, famous for the brightly coloured houses in its harbour.

Skye’s history includes a period of Norse rule and domination by Clan MacLeod and Clan Donald. It suffered particularly in the 18th-century following the Jacobite Risings, and with the breaking up of the clan system, and following the Highland Clearances that led entire communities to have to leave their land – some via forced emigrations.

After the failed Jacobite Rebellion of 1745, Flora MacDonald helped to rescue Prince Charles Edward Stuart from the Hanoverian troops, disguising him and taking him to Skye to hide.

Today, the main industries are tourism, agriculture, fishing and forestry. About a third of the residents are fluent in the Gaelic language, which is important to island culture.

The island’s peninsulas spread out from the Cuillin mountain range. Heather moors dominate the local flora; and golden eagles, red deer and Atlantic salmon are wildlife to be found in the area.

The Isle of Skye tartan was registered by Mrs Rosemary Nicolson Samios in 1992, an Australian of Skye descent, now living on Skye. It was selected through a worldwide competition won by weaver Angus MacLeod from Lewis who designed and produced the first commercial quantities in 1993 at Lochcarron Weavers in North Strome. The colours of the tartan depict those of the island, often called the “Misty Isle”.

About the notebook: This notebook is made with cloth woven in mills in the United Kingdom. Notebook pages and paper components are made with 80 gsm acid-free paper from sustainable forests. Boards used in the binding process are made of 100% recycled paper. This hardback notebook is bound in genuine British tartan cloth with an elastic closure, ribbon market, eight perforated end leaves and expandable inner note holder. It contains a removable booklet about the history of clan tartans, and a bookmark that gives information on the Isle of Skye tartan.