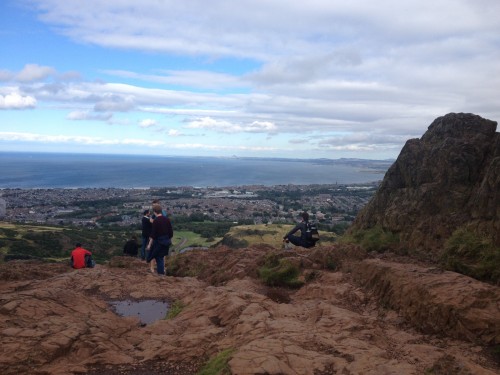 We would like to begin a series of history and place to promote our notebooks and our books. This first blog is about our tour that starts in Edinburgh – at Holyrood and the story behind the Holyrood tartan.

Today Holyrood is an area in Edinburgh, to the east of the city at the foot of the Royal Mile. It is at the edge of an open space called Holyrood Park, and has the dramatic volcanic rock Arthur’s Seat dominating the skyline.

With a palace, an abbey, a parliament and a park, it is easy to spend a full day exploring Holyrood. This quarter contains a diverse range of architecture, and it is an open space where you can climb the dormant volcano to enjoy 360-degree views of Edinburgh.

Holyrood Palace, Holyrood Abbey, Holyrood Park and Arthur’s Seat, as well as the Scottish Parliament building sit here. The view from the top of Arthur’s Seat also gives a sense of how the land once looked when the only building for miles was the Abbey.

When Holyrood Abbey was established in 1128 ‘Edinburgh’ did not exist. In fact, Edinburgh only became established in the middle of the 15th century. Today Edinburgh is the capital of Scotland. Before that, the royal family was more itinerant and had a palace at Stirling and Perth. Scone was the capital of Scotland and for centuries the only local landmark in the area was Holyrood Abbey.

The name behind Holyrood

The naming of ‘Holyrood’ is shrouded in myth and its origins are told in many forms of a story around it making it a blend of mystery and legend. Here goes:

At Holyrood King David I of Scotland founded his abbey.

King David I is reputed to be one of Scotland’s best kings. He was known as an excellent organiser and used Norman principles to guide his rule. He was deeply religious and founded many abbeys and churches, Holyrood being one of them.

One story is that King David was out hunting, in what is now called Holyrood Park. He startled a stag, and as he was attacked by the horns of the animal, a holy cross appeared and he used it to defend himself from the animal. King David 1 called the cross a ‘Haly Rude’ i.e. Holy Rood – or ‘Holy Cross’. The stag ran off, or retreated and disappeared. King David built an abbey to mark the religious experience. He called the Abbey ‘Holy Rood’ to mark the message from God. While there is no evidence that the story is true, we do know that more monastic buildings were added around 1195. The buildings included cloisters, a chapter house, guest houses and a refectory.

The enlarged abbey prospered, and from an early date contained royal chambers for use by the sovereign.

It was during the 1400s that the Abbey guesthouse was changed into a royal residence. After 1560 The Palace of Holyroodhouse was expanded during the Scottish Reformation. 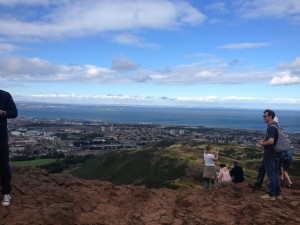 Today the Palace of Holyrood is run by the Royal Collection Trust. There are 14 state apartments that are open to the public (when the Palace is open to the public). Queen Elizabeth II uses Holyrood Palace for her stays in Edinburgh. Royalty has used Holyrood Palace for over 500 years. In current times, when not occupied by the Royal family, or locked down in the pandemic, you can visit The State Apartments of the Palace itself, and see displays of stories of its most famous residents from the past and the present. Possibly one of the most exciting periods and stories is that of Mary Queen of Scots at Holyrood. See below <Mary Queen of Scots at Holyrood Palace>

Another notable story is that of Margaret Tudor, who was Henry VIII’s sister. “Meg” is often overlooked by historians. At 13 years old Margaret Tudor travelled to Scotland to marry James IV. By then, James IV had seven illegitimate children. Margaret’s father Henry VII was determined to rule over a harmonious relationship between Scotland and England. Margaret was not happy with her three-week journey north. However she received a warm welcome. Wearing stunning dresses and jewels on her early appearances when she arrived in Scotland, Margaret was met with a welcome in Scotland. The ever-charming James IV was kind to Margaret Tudor. Despite his womanizing nature and keeping the relationship with his mistress with whom he had three children, James IV was consistent in his treatment to Margaret. She gave birth in 1512 to James V. Later, Margaret would become great grandmother to James VI and I, who in 1603 united the crowns of Scotland and England.

However, in the Reformation, Margaret’s tomb was desecrated and her skeleton was burned. She has no monument, like her first husband James IV. This period, of course, was the beginning of the Reformation, which began in Germany in 1517 with Martin Luther’s Ninety-Five Theses. While Luther wished to reform, rather than split the church, his Theses led to the Reformation that swept through Europe. In England it built on unhappiness that had been building since the 14th century.

The Reformation swept through Europe and affected England in a slightly different way, partly because of the Henry VIII issue over the king’s unhappiness with his wife Catherine of Aragon.

In 1503 James IV converted the royal chambers into a palace. Nothing remains of the early Palace buildings. On the first floor there were royal lodgings and a chapel, and James added a tower on the south side. The Palace gardens were begun and a loch next to the Abbey was drained in 1507.

James V and new royal lodgings, and a new tower

In 1528 construction began in the north-west corner of the Palace, and a huge tower was built with round corners. The tower had a drawbridge and probably a moat. The tower provided security. Today the tower is the oldest part of the Palace that survives. The tower is now the Mary Queen of Scots’ Chambers. Additional reception rooms were added on the west side as well as a gateway built from two towers, parapets and large windows. More work was done to the south, and a new chapel was built. 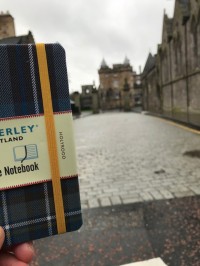 The north-west tower is still reputed to show the blood of Rizzoli on the floor. The chambers here display items themed around Mary. We will do a feature on Mary in more detail in the future but here will mention the importance of her years at the Palace in Holyrood. Mary married her second husband, Henry Stuart, Lord Darnley (1545-67), in the chapel at the Palace in July 1565. They had not been married long when Darnley became jealous of Rizzio. Darnley murdered Mary’s private secretary David Rizzio (1533-66) in Mary’s private apartments in March 1566. Mary was dining with Rizzio and her assistant, when Darnley burst in. Apparently Rizzio died at Mary's feet. He was allegedly stabbed 57 times, with Darnley assisted by a small group of men. (NB in history, Rizzio is sometimes spelled 'Riccio'.) Mary took flight immediately. A few months later she gave birth to her son James at Edinburgh Castle. Today there is a small plaque marking the point of the murder in the Audience Chamber, and a red mark on the floor.

James VI was crowned in 1567. By now much improvement work was needed and the Holyrood Palace was repaired. The Palace gardens were enlarged. James VI of Scotland became James I of England, and he returned to Edinburgh in 1617.

Charles I succeeded his father James I and his Scottish coronation took place in Holyrood Abbey in 1622. However, a fire broke out in the east side of the Palace in 1650 when Oliver Cromwell and his soldiers visited and much of the Palace became abandoned afterwards. The Palace that remained was used as a barracks. 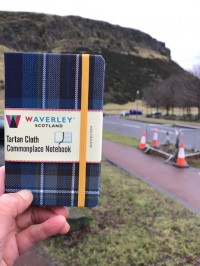 Charles II was restored to the throne in 1660. By 1671 Holyroodhouse had become a royal palace again. An eight-year period of restoration work began, overseen by King Charles II. The work was paid for by the Scottish Privy Council. Ceilings were redone in plaster, and the walls with detailed woodwork. The Great Gallery was hung with 111 portraits of the kings of Scotland – all of them painted by the Dutch artist Jacob Jacobsz de Wet II. The designer Sir William Bruce added a tower to the south-west of the Palace to balance that of the north-west, and he retained the existing plan of the Palace Edinburgh’s royal and government role was celebrated in the rebuilt Palace. By 1679 the Palace looked like it does today.

Queen Victoria visited in 1850 and the Palace was renovated for her visit. A new fountain was added and Prince Albert took interest in the changes to the Palace grounds. At this time they added a new garden.

Central heating was added in George V's reign, and the kitchens were modernised along with new bathrooms and a lift. With many more additions, the Palace became the official residence of the Queen in Scotland.

Normally HRH The Queen stays in Edinburgh at the beginning of July. This week is called 'Holyrood Week' (or 'Royal Week' as it's known in Scotland), The Queen stays at the Palace of Holyroodhouse. Meetings and visits take place.
Other notes:
Here, too, at the Palace of Holyrood, the famous John of Gaunt and King Charles X of France have, at different periods, found asylum. In the ruined Chapel adjoining, several of the Stewart kings were married, and Queen Mary gave her hand to the faithless Darnley. In its royal vault lie the bodies of Darnley himself, James II, and James V. The Chapel was twice wrecked by the mob—at the Reformation in 1560, and just before the Revolution in 1687. Here the Duke of York, afterwards James VII and II lived in 1679, while the fate of the Exclusion Bill hung in the balance. And here, on the eve of The Battle of Prestonpans, in September 1745, Prince Charles Edward led the revels in the halls of his ancestors.

Today, Holyrood is also the home of the modern Scottish Parliament Building.

In 1997 the Scottish people voted for Scotland to have a Parliament once more. The Parliament was established by the Scotland Act 1998. The first meeting was on 12 May 1999.

Ten minutes' walk northwards from Holyrood brings us to the Burns Monument and the old High School, to the Calton Hill, with its Observatory, its Nelson Column, and its abortive National Monument in memory of Waterloo. The notorious Bothwell, it is said, first attracted Queen Mary's attention by launching his steed down the steep north face of the crag.

From here we are but a short step from Princes Street, the Royal Mile and the rest of Scotland. 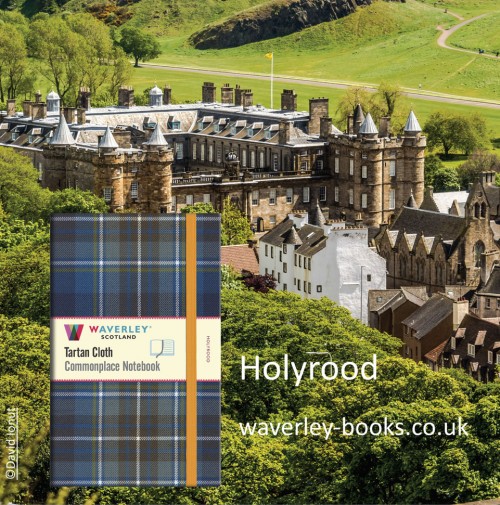