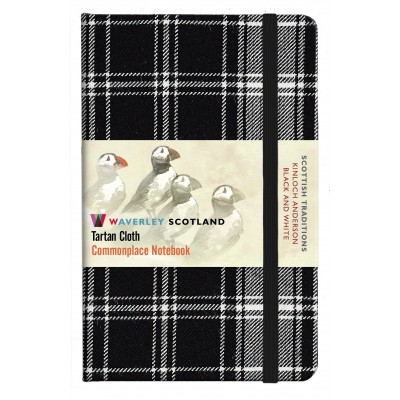 Kinloch Anderson has created its own exclusive range of tartans which are available to all. They are based on the sett of the Clan Anderson tartan. The name Anderson means son of Andrew and Kinloch means head of the loch. The Black and White Tartan responds to the infinite appeal of these two universally popular colours. Black and white reflect the image of Scotland in The Black Grouse, The Black Capercaillie and Scotland’s Puffins – found on Scottish coasts and islands. The Black Isle, The Black Lochs and the White Loch are examples which also take their names from these colours. Early weavers used local plants and natural products for their dyes so the locality of the weaver affected the colours of the local tartan. Black and white is a popular tartan to wear for weddings and celebrations.

About the notebook: This notebook is made with cloth woven in mills in the United Kingdom. Notebook pages and paper components are made with acid-free paper from sustainable forests. Boards used in the binding process are made of 100% recycled paper. This hardback notebook is bound in genuine British tartan cloth with an elastic closure, ribbon market, eight perforated end leaves and expandable inner note holder. It contains a removable booklet about the history of clan tartans, and a bookmark that gives information on the Black and White tartan.