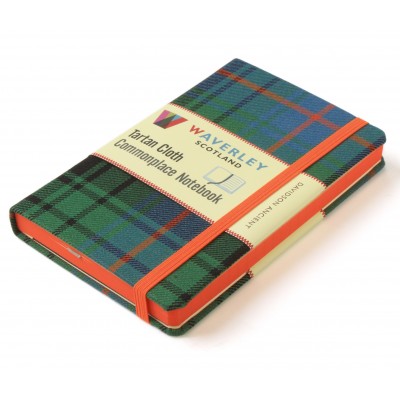 The Davidson Ancient tartan is a bright green and blue with black overlaid and a cheerful single orange stripe.

The Davidsons appear to have been a Gaelic-speaking clan who lived on lands in Badenoch (a historic area in Strathspey in the Highlands). In the early part of the 14th century, the Davidsons became part of the Clan Chattan confederation, an alliance of clans that included the MacPhersons, Mackintoshes, MacGillivrays and MacBeans. The first chief, David Dubh, was the son of Donald Dubh, a Comyn, and Slane, daughter of the sixth Mackintosh chief. Thereafter the clan became known as Clan Dhai.

The Davidsons appear to have been virtually destroyed by clan conflict in the late 14th century. One account concerns the battle of Invernahaven in 1370, when the Camerons marched on the Mackintoshes in a dispute over land rent. As the rival clans prepared for combat, the Mackintoshes had the support of other families in the Clan Chattan confederation, including the Davidsons and the MacPhersons. However, a disagreement arose between these two clans over the command in battle and the MacPhersons left the field feeling they had been dishonoured. In the ensuing confusion the Camerons attacked the Davidsons who, it is said, suffered almost complete annihilation.

Another account cites a clan battle in 1396 on the North Inch at Perth that was fought in front of King Robert III. The Davidsons fought as part of the Clan Chattan forces against the Camerons. Soon after this battle it seems that the Davidsons moved to Tulloch, the area with which the family is principally associated, and over the centuries the name appears in other parts of Scotland, including the Borders.

About the notebook: This notebook is made with cloth woven in mills in the United Kingdom. Notebook pages and paper components are made with acid-free 80gsm paper from sustainable forests. Boards used in the binding process are made of 100% recycled paper. This hardback notebook is bound in genuine British tartan cloth with an elastic closure, ribbon market, eight perforated end leaves and expandable inner note holder. It contains a removable booklet about the history of clan tartans, and a bookmark that gives information on the Davidson Ancient tartan.