And so here we are, January 25th. Burns Night.

We have been featuring Burns’ epic poem Tam O’ Shanter, today being the 5th and concluding part with a simplified English translation.

The story behind the poem is interesting.

This marvellously vivid piece of description, represents more fully than any of Burns' other poems the greatness of his imaginative gifts; and apart from songs and the Elegy on Captain Henderson is the only very notable example of his muse during the last nine years of his life.

Yet it owes its origin to mere accident.

The churchyard surrounding the ruined kirk of Alloway was the burial place of his father, and when Burns in 1789 met Captain Francis Grose while he was staying with Robert Riddell at the Friar’s Carse, when visiting Scotland to making drawings for his work on The Antiquities of Scotland, he suggested to Grose to insert a picture of the ruined kirk in his volume. But as no architectural interest attaches to the ruin, Grose only agreed to the request on condition that Burns should "furnish a witch story to be printed along with it". Apparently what Grose expected and Burns first intended was a witch story in prose, for he sent three samples from which Grose might chose; and it was only by a happy second thought that Burns found in one of the tales the theme for his immortal Tam o' Shanter.

Here is the Tam O’Shanter story in Burns's own prose: —

On a market-day in the town of Ayr, a farmer from Carrick and consequently whose way lay by the very gate of Alloway kirkyard, in order to cross the river Doon at the old bridge, which is about two or three hundred yards further on than the said gate, had been detained by his business till by the time he reached Alloway it was the wizard hour between night and morning.

Though he was terrified with a blaze shining from the kirk, yet, as it is a well-known fact that to turn back on these occasions is running by far the greatest risk of mischief, he prudently advanced on his road.

When he had reached the gate of the kirkyard, he was surprised and entertained, through the ribs and arches of an old Gothic window, which still faces the highway, to see a dance of witches merrily footing it round their old sooty blackguard master, who was keeping them all alive with the power of his bagpipe.

The farmer, stopping his horse to observe them a little, could plainly descry the faces of many old women of his acquaintance and neighbourhood. How the gentleman was dressed tradition does not say, but that the ladies were all in their smocks: and one of them

happening unluckily to have a smock which was considerably short to answer all the purposes of that piece of dress, our farmer was so tickled that he involuntarily burst out with a loud laugh, 'Weel luppen Maggy wi' the short sark!', and, recollecting himself, instantly spurred his horse to the top of his speed.

I need not mention the universally known fact, that no diabolical power can pursue you beyond the middle of a running stream. Lucky it was for the poor farmer that the river Doon was so near, for notwithstanding the speed of the horse, which was a good one, when he reached the middle of the arch of the bridge, and consequently the middle of the stream, the pursuing vengeful hags were so close at his heels that one of them actually sprang to seize him; but it was too late; nothing was on her side of the stream but the horses tail, which immediately gave way at her infernal grip, as if blasted by a stroke of lightning; but the farmer was beyond her reach.

However the unsightly tailless condition of the vigorous steed was, to the last hour of the noble creature's life, an awful warning to the Carrick farmers not to stay too long in Ayr markets. 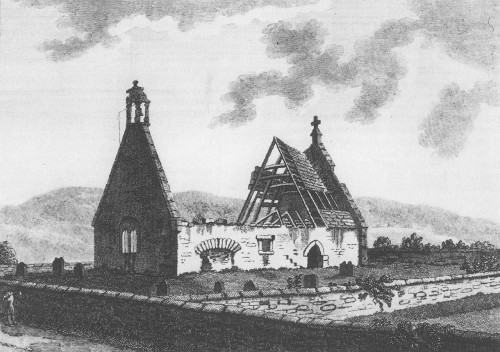 Illustration : Alloway Kirk from Grose's The Antiquities of Scotland